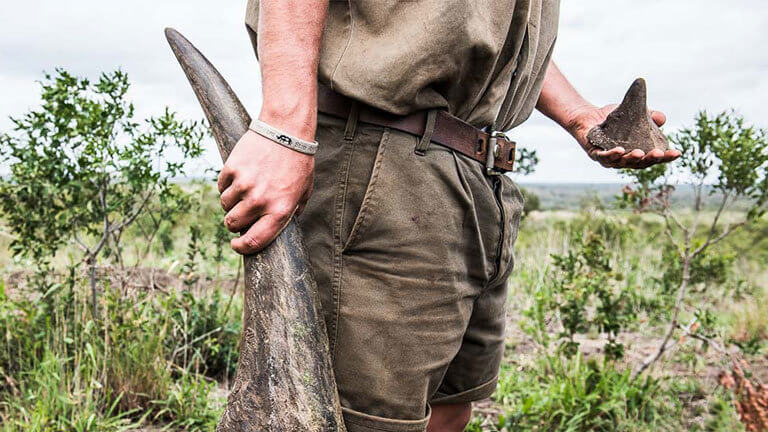 Rhino horns have the same healing powers as fingernails!

Rhino poaching has escalated in recent years and it is estimated that three rhinos are killed every day for their horns.  This is a result of an increase in demand from Asian countries where their horns are considered a valuable ingredient in some forms of traditional medicine.  The horns are ground to a powder and ingested as a treatment for everything from fever and snake bites, to cancer and hangovers.  Some even believe it can be used as an aphrodisiac!

Rhino horns are made up of keratin

Rhino horns are made up of keratin, the very same substance that forms our nails and hair. In essence, the “benefits” achieved from consuming rhino horn should just as easily be able to be achieved by biting our fingernails! The thought of someone ingesting nails or hair to cure an ailment seems completely bizarre (and disgusting), so why would one believe that ingesting rhino horn would be any different?

There is no difference between rhino horn and our fingernails

The only difference between rhino horn and our nails, is the unique shape of the horn.  There is no other difference!  We need to dispel this myth of the magical healing powers of rhino horn, and it starts with education. China and Vietnam are two of the biggest consumers of rhino horns and recent conservation campaigns in these markets have been used to highlight that rhino horn is just keratin and is therefore the same as our nails.

Conservation groups WildAid and the African Wildlife Foundation ran a campaign called “Nail Biters” featuring Sir Richard Branson and Chinese celebrities appearing on billboards and in videos biting on their nails.  In one advert, Sir Richard Branson is shown biting his nails with the accompanying words “Keratin. That’s all it is. No different or more a medical remedy than your fingernails. So with a dwindling rhino population, why kill off one of our planet’s greatest species for no reason?”

One of the main aims of The Boucher Legacy is to educate people in order to dispel the myths surrounding rhino horn and therefore stop the demand for them.  One wouldn’t pay millions of dollars for a bag of fingernail clippings, so why should rhino horn be any different?