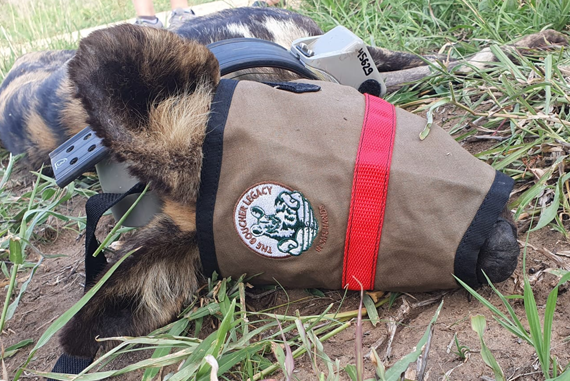 The wild dog is one the most social animals, with strong bonds between all individuals in a pack. They have a structured social order led by an alpha female, a unique hunting style of organised chaos and an orderly approach to feeding on a kill, allowing pups to eat first. Yet, sadly, wild dogs are also one of the most misunderstood of Africa’s endangered species, with a reputation for being cruel and often mistakenly blamed for livestock losses through other predators.

“The wild dog is one the most social animals, with strong bonds between all individuals in a pack. They have a structured social order led by an alpha female, a unique hunting style of organised chaos and an orderly approach to feeding on a kill, allowing pups to eat first.”

A combination of human and natural threats has resulted in the wild dog disappearing from most of their former range and they are currently found in only 14 of the 39 African countries they used to occur in. Today, there are fewer than 5 000 wild dogs on the entire African continent, making the wild dog even rarer than the rhino.

“Today, there are fewer than 5 000 wild dogs on the entire African continent, making the wild dog even rarer than the rhino.”

Wild dogs naturally roam vast areas, with packs easily covering more than 800km2 of habitat in the Kruger. Wild dogs have been known to cover over 50km in a single day looking for food. This means that wild dogs are very sensitive not only to habitat loss, but also to fragmentation of habitat through fences, farming and urban areas.  The result is that they often end up outside of protected areas in livestock or commercial game farming areas, where they might be persecuted or come in contact with domestic dogs that might potentially transmit diseases to them.  Snaring, even though wild dogs are not targeted, has become another major threat posed by humans, killing at least thirty wild dogs over the past five years.

Why we collar wild dogs

There are estimated to be around 30 wild dog packs within the Greater Kruger National Park. That is the largest contiguous population of African wild dogs remaining in South Africa. As the African wild dog is the second most endangered carnivore in Africa, tracking and monitoring them has become essential for the preservation of the species.

During the last quarter of 2020, The Boucher Legacy partnered with SANParks, Endangered Wildlife Trust (EWT) and the Max-Planck Institute of Animal Behavior (MPI-AB), a team specifically focused on African wild dog conservation. This project is aimed at protecting wild dog packs within the Kruger National Park and surrounding reserves, tracking the movement of the packs, and ultimately working towards ensuring their safe return to the Greater Kruger, should they roam beyond the borders of the Kruger Park.

At the same time, in partnership with the MPI-AB’s engineers and renowned biologists, our dedicated team of specialists are working hard at refining existing tracking systems. Our aim is to enhance the technology currently used for the tracking of our endangered mammals, most especially rhinos, to be less intrusive, while simultaneously monitoring the animal’s behaviour, to detect any signs of distress.

We recently received our first consignment of collars and put them to use in the tracking of our wild dogs.

“As the African wild dog is the second most endangered carnivore in Africa, tracking and monitoring them has become essential for the preservation of the species.”

Our aim is to collar one adult female in each pack throughout the Greater Kruger National Park. Monitoring their movement enables us to send timeous alerts to conservation managers about collars that have stopped moving, packs that have moved out of the protected area and into an area where they are at risk of being persecuted, packs that have recently moved through areas with a known high incidence of snares or packs that have moved through an area where there is a chance of them coming in contact with domestic dogs which could transmit diseases such as rabies & distemper.  This allows conservation managers to take quick action in protecting these animals.

To date, we have successfully collared 14 of the estimated 30 packs in Greater Kruger. Tracking wild dogs is an essential tool to mitigate against the threats wild dogs face and we believe this innovative approach, using a near real time monitoring platform to assist conservationists to respond will increase the protection of the most endangered carnivore in Southern Africa.

We have also partnered with The African Pangolin Working Group (APWG) to protect pangolin and assistant with the rehabilitation of several rescued pangolins. Read more here.

Follow our team and stay up to date with all the progress: